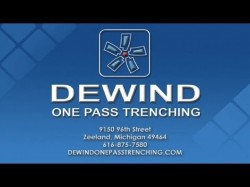 This project video seems a few years old, but it’s relatively new on YouTube and it’s a fantastic case study of the slick method of installing groundwater interception trenches using DeWind’s remarkable one-pass trenching technology. Hill Air Force Base in Utah had been using jet fuel ignited on a mock aircraft to train firefighters. The jet fuel had leached into the soil and was reaching the shallow aquifer. The DeWind technology was used to install a drainage trench to intercept the contaminated groundwater and pump it out for treatment before it reached the aquifer. This approach was several million dollars less costly than other alternatives they looked at. Project staff considered this method more likely to intercept the contamination than discrete wells spaced along the same alignment. [Source: DeWind YouTube. Image: YouTube]

Modified from the YouTube description: Video of a DeWind One-Pass Trencher installing a Soil-Bentonite Wall 55′ deep. This is a mix in place technology capable of installations up to 125′ feet deep. The soils are […]

This video for the Massena Lateral Bridge Slide from Iowa DOT shows a very nice 3D rendering of the entire accelerated bridge construction process. They are using a lateral slide method to construct the bridge […]