A magnitude 6.8 earthquake struck Taiwan on September 19th, toppling buildings and bridges, derailing trains, and causing widespread disruption of services and communications. According to the BBC, at least one person was killed and 146 injured. Some of the most dramatic damage is a badly damaged bridge in southeastern Taiwan shown in the drone footage below. 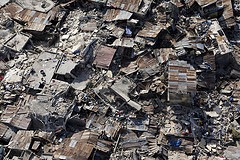