At the end of last month, the Oregon Department of Geology and Mineral Industries (DOGAMI) issued this press release describing their new online interface for their statewide digital geologic map. The online version only covers the eastern portion of the state at the present time. But the interface is not too shabby with the ability to view conventional stratigraphy information, rock properties layers or general rock type. Available overlays include faults, highways, formation boundaries, cities/towns and USGS quad grids. You can also add a shaded relief map or topographic map base map or combine them both. And a feature I wish was more common in some of these online interfaces, they have the ability to export images when you get the view you want. It appears that you can do it at resolutions up to 1200 ppi. 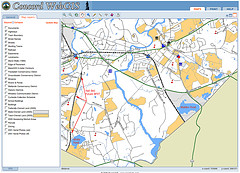 RESTON, VA, February 23, 2009 – The economic stimulus bill passed by Congress and signed into law last week by President Obama includes more than $73 billion in programs that will require geospatial data, technology, services and applications in at least 24 Federal agencies, according to an analysis by MAPPS (www.mapps.org), the association of geospatial firms. [Editor] Click through for the rest of the press release. (Photo by TalkingTree) [/Editor]