Earth fissures pose a significant safety risk to several existing flood control embankment dams in the Southwest. As population increases in the Southwest there is a commensurate demand for groundwater. Thus, subsidence and related earth fissures will continue to adversely impact dams and other infrastructure in the future, to an even greater extent than today. Thus, understanding the science of earth fissures will continue to gain greater importance with time.

The dilemma facing the state dam safety regulator today and what complicated the approval of the rehabilitation of the White Tanks FRS No. 3 Dam and McMicken Dam is the paucity of both information and analytical methods related to fissure erosion and the performance of embankment dams on earth fissure risk zones. The current state-of-thepractice related to dams in fissure risk zones is at an infant stage, forcing the dam owner, design engineer and dam safety regulator to exercise, as judged today, conservative approaches in the rehabilitation of a dam in a fissure risk zone. There is so little science and performance data that there is no assurance the rehabilitation approach taken today will prove conservative in the light of advances made in fissure science in the future.

As the regulatory agency charged with dam safety oversight responsibilities in Arizona, the Arizona Department of Water Resources is fully committed to the safe design, construction, and operation of dams in the State. With increasing urban growth in the state, the Department is acutely aware of the need for both safe and cost effective flood protection such as afforded by White Tanks FRS No. 3 Dam and McMicken Dam. While breaching or removing these two flood control dams because they are located in fissure risk zones would eliminate the risk from a dam safety point of view, the public will then be exposed to the risk of flooding. The Department believed the greater public need would be better served by assessing all aspects of the state of the practice with respect to the safety of embankment dams in fissure risk zones. This included working with the owner and the respective design engineering firms to evaluate every available consideration to see if there was a combination of safety measures which appeared to result in a safe rehabilitation of each dam.

A critical factor that the Department considered in the decision to permit the proposed rehabilitation projects for White Tanks FRS No. 3 and McMicken Dam was that both these dams are single-purpose flood control structures and are generally dry. Thus, conducting long-term monitoring for detection of a fissure prior to the occurrence of a major flood pool is feasible and can be included as a factor that will enhance the safety of the dam against the risk of failure from an undetected fissure. Furthermore, these types of dams also allow rehabilitation to be performed, with little risk of the reservoir filling while the dam is threatened by the presence of a fissure and this factor can also be included as a safety enhancement.

Finally, while all the factors indicate a safe dam rehabilitation, the dam safety regulator must still appreciate the many unknowns and assumptions being made in the present state of the art and knowledge related to the mechanics of fissure development and erosion, especially under the hydraulic head imposed by a full reservoir. Advances will occur in the science and engineering related to building and maintaining safe dams in fissure zones. Thus, an essential part of the present regulatory approval of the McMicken Dam and White Tanks FRS No. 3 Dam rehabilitations was a stipulation for a full reassessment of all technical factors, each 10 years, to confirm the safety of each dam in the fissure risk zones.

The science and state of the practice for an embankment dam in an earth fissure risk zone needs to be advanced by harnessing the available intellectual capital being developed around the world. Together these experts have the capability of advancing fissure science in areas related to the mechanisms of fissure development, understanding of potential failure modes related to embankment dams, requirements for comprehensive field investigations, and comprehensive laboratory and field testing to develop computer model erosion parameters, development of robust computer models to simulate fissure erosion, and the development of engineering designs that result in safe dams.

The Flood Control District of Maricopa County operates and maintains White Tanks FRS No. 3 and McMicken Dam. URS Corporation is the designer for White Tanks FRS No. 3 rehabilitation project, and AMEC Earth & Environmental Inc. is the designer for the McMicken Dam Fissure Risk Zone Remediation project. Photographs of fissures were provided by Ralph Weeks, P.G., Ray Harris, P.G. and Ken Euge, P.G. Their contributions are acknowledged and appreciated. 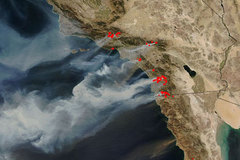 A call for volunteers has been made on behalf of Governor Schwarzenegger by way of the California Department of Consumer Affairs website as reported by AEG. They are looking for professionals registered by the California Boards of Geology and Engineers and Professional Land Surveyors as well as a number of other boards. Read on for the full announcement.