McMicken Dam is located in Western Maricopa County in Central Arizona. The dam was designed and constructed by the U.S. Army Corps of Engineers in the mid 1950s. The dam is a homogenous earth embankment, approximately 9 miles in length, and a maximum height of approximately 27 feet. The dam is located on the lower reaches of an alluvial fan. The foundation profile consists of deep unconsolidated alluvial deposits consisting primarily of cemented sandy gravels to depths of over 100 feet in the project area on the southwest end of the dam. The alluvial deposits range in total depth from approximately 400 on the southwest end of the dam to over 1600 feet on the northeast end of the dam (Oppenheimer, 1980).

Declines in groundwater levels have caused as much as 4 feet of subsidence at McMicken Dam. The maximum subsidence occurs on the northeast end of the dam over the deeper alluvial deposits. However, studies in the early 1980s (AMEC, 2003a) identified earth fissures in the downstream vicinity of the southwest end of the dam. In 1982, the nearest fissure to the dam was approximately 650 feet from the embankment (AMEC, 2003a). Recent studies identified surficial features such as potholes and small depressions within 125 feet of the embankment. Subsurface investigations identified fissure traces both upstream and downstream of the embankment. Results of subsidence modeling (AMEC, 2003b) indicate if groundwater levels remain constant, horizontal strains may increase only slightly with time. If groundwater levels were to drop significantly (on the order of 100 feet), the risk associated with either widening of existing fissures or development of new fissures would increase (AMEC, 2003b).

FCD has chosen a design that includes elimination of the southern 7800 feet of dam currently located within a high fissure risk zone. The site investigation identified open fissures below the dam and hairline trace fissures extending under the dam into the reservoir area. This section of the dam will be replaced by constructing a new soil-cement embankment extension, oriented roughly perpendicular to the existing dam centerline to retain the flood pool. The new embankment will be outside the high fissure risk zone and will be founded on coarse-grained and/or cemented Pleistocene age soils. The shallow Holocene soils will be removed to eliminate any potential for collapsible soils in the foundation and to remove highly erodible soils. The design includes a 40-foot wide horizontal, upstream soil-cement blanket. The design also includes upstream channels to divert flows that reported to the south end of the old dam, and construction of a retention basin to provide the required flood protection. Figure 7 shows a cross section of the new soil-cement embankment.

The design philosophy is that the Pliestocene foundation soils at McMicken Dam have moderate to high erosion resistance, and except for very small zones the erosion resistance exceeds the erosive forces. Thus, very little erosion is predicted if seepage were to occur along a potential earth fissure. These soils are generally believed to be coarse grained and will also tend to plug a small fissure. Early modeling indicated an upstream soil cement blanket was more cost effective than cutoff walls to reduce the potential erosion along a foundation fissure. The 40-foot soil cement blanket upstream of the dam increases the flowpath length, reducing the initially available erosive forces. This reduced erosive force is expected to limit the eroded width of the fissure, and thus, limit the rate of uncontrolled discharge from the reservoir. The soil-cement embankment is a key structural element of the project that is provided to structurally bridge an eroded fissure and to prevent erosion along any cracking that may occur in the dam in association with a foundation fissure.

Our concerns at McMicken Dam lay primarily with the characterization of the subsurface soils at the site. For the fissure erosion modeling, the designer assumed that the soils at the site were moderately to strongly cemented, with minimal susceptibility to slaking and weakening when exposed to water, and with moderate to high thresholds of erosion. The initial geotechnical investigations at the site appeared to support this assumption. Late during the design process however, the designer cored the subsurface soils using the triple tube technique discussed earlier in this paper. Core recovery was excellent, and zones of weaker cementation and slaking susceptibility were identified in the core. Furthermore, the Department was also concerned that the designer had performed no erosion testing at this site, and instead relied entirely on geophysical and excavation data to assign numerical values for erosion resistance. To address the more erodible soils within the profile, the Department requested the owner and designer to perform additional modeling using lower thresholds or erosion for the weaker soil strata. Even with these lower thresholds, the modeling demonstrated that seepage erosion along the fissure would be small.

The Department’s first dilemma was that the existing dam is located in a known fissure zone. However, the rehabilitated portion of the dam was being relocated to a predicted moderate fissure risk zone, in which the site investigation identified several hairline cracks in the foundation. Given this, could the Department withhold a permit to rehabilitate and significantly increase the safety of the existing dam?

The Department’s second dilemma was we were not convinced that the present state of technology for the model or soil characterization truly simulates the actual erosion along a fissure. However, we believe that the proposed design protects against these unknowns to a large degree. We do believe the model allows an assessment of the positive impact of structural elements as well as the negative impact of increasing width of a potential fissure. The modeling performed by the owner’s design engineer convinced the Department that the dam design must include a core of soil-cement and that the foundation requires an upstream soil-cement blanket. The modeling also convinced the Department that any fissure must be detected and remediated at very small crack widths (1/4 to 1/2 inches).

Since the model results indicated it was essential to detect very small fissure widths, the third dilemma for the Department related to whether monitoring of the dam for fissure development was feasible. The Department had to be convinced that the state of technology had advanced to the point where very accurate ground strains could be measured as a precursor to fissure development and that small-width fissures could be detected when there were no surface expressions. If this was not possible, we believed it would not be safe to rehabilitate this dam in a fissure risk zone. Through evidence obtained during several site investigations at FCD dams in Arizona and the experience of one of the owners design engineers, the Department was convinced that there was a very high degree of confidence that a well planned monitoring program could detect both the ground strain occurring as a precursor to fissure development and also any small-width fissures which may be developing below the ground surface.

The Department believes the foundation soils at McMicken Dam are erosion resistant because of the degree of cementation, and/or the primary presence of large-size particles within the subsurface. The Department believes proposed dam design in conjunction with the proposed monitoring program will result in a safe dam that provides the greater public the required long-term flood protection. As with White Tanks FRS No.3, the owner is required to review safety of the dam on a 10-year cycle to confirm that the remedial measures implemented today continue to meet current dam safety practices and standards.

A collection of geologic hazard photos from the NOAA National Geophysical Data Center (NGDC). Many of these photos were originally 35mm slide sets made available to educators and others. Now you can download them. Only […] 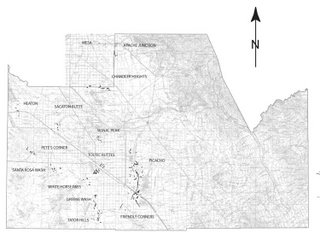 Earth Fissures in the News

April 29, 2008 rockman Geologic Hazards Comments Off on Earth Fissures in the News

Arizona State Geologist Lee Allison blogged about some recent news coverage of earth fissures as a result of the AZGS’ release of the first of their earth fissure maps. Here is what he said:

The East Valley Tribune published an extensive set of news features on earth fissures in their Sunday edition, including timeline, maps, videos, and an animation of how fissures form.

KPHO, CBS channel 5 in Phoenix, also has a nice video segment with great aerial shots of the 2005 fissure in Chandler Heights that triggered the recent interest in this hazard.

Here is the video he was referring to.