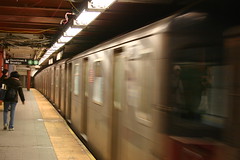 And a train was actually hit! Fortunately it was stationary on the tracks, but it crushed the side panel of the driver’s carriage. Neither the driver nor any passengers were injured in the incident. The drill rig was drilling to install ground source heating or geothermal heating for a hotel when at a depth of 20 to 25 meters (65 to 82-ft), the drillers noticed that they lost resistance when they punched through the subway tunnel. Upon withdrawing the drill stem, they were missing the bottom 2.5-m according to a local police official. Story at The Local. (Photo of N.Y. Subway from runnx)

Advanced Construction Technology Services (ACTS) has contracts for geotechnical work for 3 lines of the proposed subway in Doha, Qatar. They have completed investigations for approximately 95 km of line and 51 stations and are […]