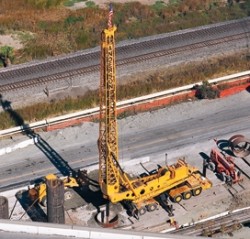 Big Stan is a drill rig like no other. Weighing in at 250,000 lb with a mast 90-ft high, it is the largest truck mounted drill rig in the southwest and possibly one of the biggest period. Created by Anderson Drilling of Lakeside, CA (now a subsidiary of the Keller Group, and sister company to Hayward Baker and Case Foundations among othes) in 1986, it is used by the company to perform the largest, deepest, most challenging foundation drilling in formations that are problematic for smaller rigs. They have drilled holes up to 30-ft in diameter and the rig can go as deep as 200-ft using its 534,000 ft-lbs of torque and 75,000 lbs of crowd pressure. It was named after the retired president of Anderson Drilling, Stan Anderson. Big Stan is currently drilling 10-ft diameter, 100-ft deep foundations for I-15 bridges on the southern outskirts of Las Vegas. Check out the video of Big Stan from Discovery Channel’s Monster Machines (courtesy of Anderson Drilling’s Big Stan page).

Keller posted a very cool drone video of a anchored bored pile wall in an urban area of Lisbon, Portugal. I don’t speak Portuguese, so I can’t read the captions, but the video speaks for […]

Anderson Drilling has a unique tradition dating back to the founders of the compnay where they name most items in their fleet of foundation drilling equipment. They recently purchases a 48-inch Atlas Copco cluster drill […]