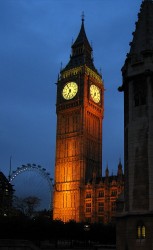 London’s famous landmark Big Ben is now about 1/2 of a meter off of perpendicular according to recent surveys. The monument has been tilting towards the north for some time, with the rate of movement up to about 1 cm/year since 2003, which represents a 40 percent increase in rate of movement over previous years. The quoted expert, John Burland from London’s Imperial College, says at these rates it will take about 4,000 years to match the angle of the Leaning Tower of Pisa. There was no mention of any remediation being planned in the immediate future, and the implication was that there was no immediate need for action. [Source: NZ Herald via GI Twitter. Image: Wikipedia]

Winners of the GE Awards revealed

June 17, 2013 rockman Miscellaneous Comments Off on Winners of the GE Awards revealed