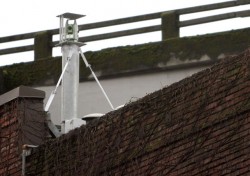 Over 200 buildings will receive some form of geotechnical and geostructural monitoring around the Highway 99 tunnel in Seattle, better known as the tunnel that will replace the Alaskan Way Viaduct. A Seattle Times article listed some of the technologies being employed, such as automated survey machines, crack meters, extensometers, tiltmeters, liquid level sensors, inclinometers and crack gauges. A total of roughly 700 devices will be deployed by the time the tunneling starts this summer, a $20 million program. The project team will also be using interferrometric synthetic aperture radar or INSAR techniques to supplement the traditional surveying methods as they watch for subsidence and ground loss problems along the tunnel route. This satellite-based method is accurate up to 1/8 inch, but has the advantage of being able to cover a larger area than just using the survey prisms at particular points. [Source: The Seattle Times via ASCE SmartBrief. Image: KEN LAMBERT / THE SEATTLE TIMES]

On October 15, a major milestone was reached on Europe and the World’s longest rail tunnel. The Gotthard Base tunnel under the Swiss Alps will form a high speed rail link between northern and southern […]

The repaired cutterhead has been in the pit several weeks now, and the final three pieces of shielding for the Bertha TBM have been lowered into the access pit. Seattle Tunnel Partners team members will […]

GeoPrac sponsor Moretrench is a key team member of the Second Avenue subway team, performing ground freezing on a 150-ft stretch of tunnel alignment in preparation for the second tunnel. ENR reports that approximately 7,200 […]