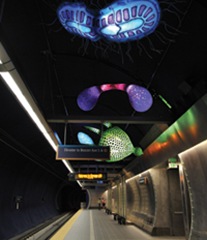 This project was the largest and deepest tunnel in North America that was excavated with Sequential Excavation Method (SEM) also known as the New Austrian Tunneling Method (NATM). It consisted of over 1-mile of tunnel and a deep mined station in some very poor soils conditions. The invert of the platform is 156-ft below the ground surface. The tunneling contractor was Obayashi Corp. (Photo of Seattle’s Beacon Hill Tunnel, from TBM Magazine Website)

Specialty geotechnical contractor and GeoPrac.net sponsor Moretrench constructed the deep dewatering system needed to construct the 60-ft diameter vertical access shaft as well as the up to 45-ft diameter tunnels and the station in the granular soil deposits.

Not to detract from this remarkable engineering achievement, but I’ve  blogged about some of the problems this project has encountered previously, such as an additional $1-million in geotechnical investigations needed and voids opening up as a result of the tunneling. 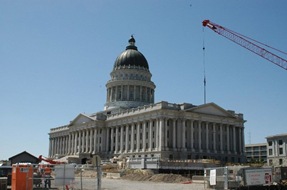 This historically important structure sits within several hundred feet of the Wasatch Fault which is potentially capable of a magnitude 7.3 earthquake. The project was undertaken to decouple the building from the ground using some 256 base isolators, virtually replacing the entire foundation system for the building all without raising or lowering the structure by more than 1/16 of an inch. Of course there was a significant structural component to this project as well to reinforce the interior of the building to withstand the design earthquake. 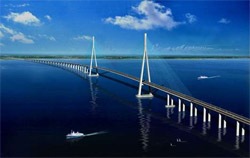 This structure is the longest cable stayed bridge in the world at 1,088-m (over 3,500-ft). Spanning the Chang (Yangtze) River, a significant marine corridor, each of the two massive pylons sit on a barbell shaped pile cap 113.8-m by 48.1-m(373-ft by 158-ft) which connects 131 drilled shafts with diameters of 2.8-m and 2.5-m (roughly 8-9-ft) and lengths of 114-m and 117-m, respectively (374-ft and 384-ft). You can check out a nice paper on the Design and Construction of the Sutong Bridge Foundations where they describe not only the foundation system but the scour protection as well. 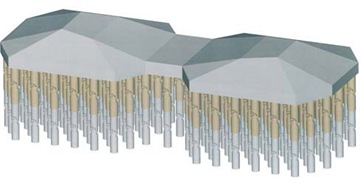 Pylon pile cap and drilled shaft foundations at each of the two main pylons of the Sutong Bridge (From Bittner et. al)

This project consisted of 12-ft diameter water supply tunnels some 9.6-miles in combined length. They transport over 1,000-cfs of water to thirsty Southern California Residents. This project kind of reminds me of the Claremont Tunnel which was designed to survive not just the shaking of an earthquake but also an offset of 7.5-ft on the Hayward Fault.

This project stabilized a2,700-ft long bluff 130-ft high along Lake Michigan. It included a bioengineered habitat as well as a number of other environmentally sensitive features. As the name implies, they intend for the project to serve as an example of sustainable engineering.

For transportation related geotechnical engineering, these publications are an absolute must! But all practicing geotechs should find something useful. Visit FHWA Geotechnical Engineering Publications