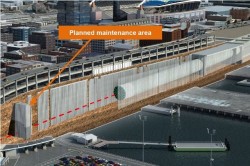 The Bertha tunnel boring machine has resumed chewing away beneath Seattle after a ‘suspension for cause’ order from WSDOT shut it down in January following two safety incidents. The BTM began tunneling with some conditions in place late in February, and those conditions were lifted when the demonstration period ended on March 7. Bertha has now reached her next scheduled maintenance stop, having tunneled a total of 1,560 feet. [Source: WSDOT Alaskan Way Viaduct Replacement Project Page. Image: WSDOT]

Video: Monitoring the ground and buildings during SR 99 tunnel construction