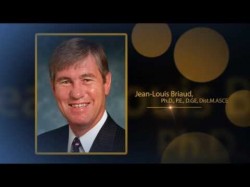 The Geo-Institute of ASCE has a fantastic YouTube series called Geolegends where they interview the titans of our geoprofession. Their latest in the series is an interview with Dr. G. Wayne Clough. You might be […]

As I gear up for another great day of technical talks, networking and wonderful San Diego weather, here are a few thoughts from yesterday at Geo-Congress 2013. The morning started with two great keynote lectures.  […]

June 20, 2019 rockman Comings and Goings, News Comments Off on ASCE Election Results: Briaud to Be 2020 President-Elect

Jean-Louis Briaud will be the next President-Elect of ASCE. He is a well-known figure in geotechnical engineering and has been a dedicated servant of our profession. He will serve as President-Elect for 2020, and his […]