A section of Route 30 in East Pittsburgh, Pennsylvania has been destroyed by a landslide, and the road could remain closed for several months.  An apartment building down-slope has also been destroyed, although all residents were evacuated and there were no reported injuries.  There had already been several landslides since mid-February in the Pittsburgh area as temperatures increase and above-average rainfall has occurred in March.

Pennsylvania DOT has a contractor on board to begin clearing the slide, and geotechnical engineers have already been performing an investigation to attempt to find the cause of the slide and design a solution.  Funding will likely come from FEMA as well as state and local sources.  A series of videos can be found on the website of WTAE, and the video below from the local CBS affiliate provides a good overview of recent activities. 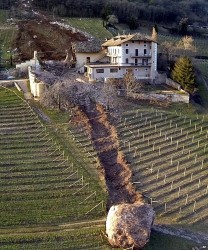 It has been over 1 year since an excavation for a new Wal-Mart store in Kilbuck Township, PA caused a massive landslide that closed Route 65 for two weeks, and temporarily closed a rail line […]

The City of Pittsburgh Pennsylvania has recently started a nearly $1M landslide remediation project on the City’s north side, but it is only one of nearly 20 landslide sites affecting public rights of way being monitored […]