The Use of the Pile Driving Analyzer for Installing Pile Foundations

March 2, 2011 Scott A Barnhill Articles, Deep Foundations Comments Off on The Use of the Pile Driving Analyzer for Installing Pile Foundations 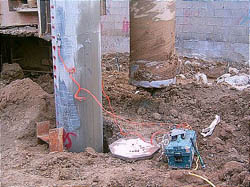 [Editor] The pile driving analyzer or PDA is used to measure the response of piles during driving. It was originally developed to analyze pile drivability, but is sometimes used as a substitute for pile static load tests to determine . Mr. Scott A. Barnhill, P.E., Executive Vice President of consulting firm GeoEnvironmental Resources, Inc. located in Virginia Beach, Virginia has seen PDA being used and misused over his 33-year career. In this article, Mr. Barnhill describes pitfalls in relying solely on the PDA for pile capacities, and also describes what PDA is good at and how it can be used successfully. [/Editor]

Earth Contact Products (ECP) is “The Very Best” manufacturer of steel foundation repair products in the industry. We provide our national network of foundation repair contractors with a superior lineup of piers, piles and anchors […]