In an article titled Miners of Messines, the Australian reports an account of what happened on June 7, 1917 where a series of 19 underground bombs, totaling 450,000kg of high explosive secretly placed in Allied tunnels under German lines along the Messines ridge in the Ypres area of Belgium and detonated within seconds of each other:

The scene that morning was as if Hades had belched from the earth. The medieval stratagem of laying mines to break into besieged fortresses had reached its zenith. War correspondent Philip Gibbs called it "the most diabolical splendour I have ever seen". An unidentified tunneller writing in 1930 recalled: "All hell broke loose. It was indescribable. In the pale light it appeared as if the whole enemy line had begun to dance. Then, one after the other, huge tongues of flame shot hundreds of feet into the air." Another witness said: "Truly, the earth quaked." 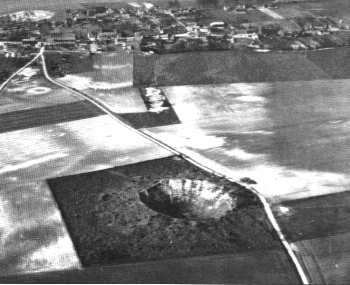