The Arizona DOT has posted three new LRFD geotechnical policy memoranda and revised three others.  Use of LRFD or Load and Resistance Factor Design is now mandatory on all federally funded roadway projects and agencies and consultants have had plenty of issues with the transition.  ADOT has been one of the more proactive agencies at implementing the geotechnical aspects of the AASHTO LRFD Code and providing guidance to consultants in the form of these policy memos.

The first three ADOT policy memos were released in 2008. These included two related to Drilled Shafts – One describing the procedures for analyzing axial capacity at both strength and service limit states (now referred to as DS-1), and one describing an ADOT policy related to axial capacity in gravelly soils (DS-2).  The third memo described the procedure for analyzing spread footings for both bearing resistance and settlement (SF-1).   The revisions to these three memos seem fairly minor, mostly corrections and changes to reflect a new naming system for all the memos.

So if you are practicing outside Arizona, why should you care about these memos?  First of all, my former employer, NCS Consultants, LLC was largely responsible for these memos despite the fact that they are formally issued by ADOT directly.  Naresh Samtani at NCS is a recognized expert in LRFD, and the work that NCS has done for ADOT is closely looked at by other DOTs, the FHWA and even AASHTO.  So at a minimum, they offer additional interpretation and guidance for implementing LRFD for geotechnical features, but you may see other DOTs issuing similar guidance, or possibly some changes in the AASHTO code itself. [Source: ]

Our geotechnical engineers, geologists and scientists are seasoned professionals with backgrounds in geotechnical, civil and structural engineering; industrial hygiene; biology and geology. With such diverse resources, CTL|Thompson has built time-tested trust with our technical excellence, […] 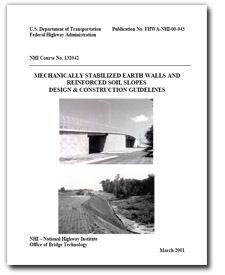 [Disclosure] NCS Consultants is the employer (day job) of Randy Post, the owner of this site. [/Disclosure]

Geotechnical engineers who encounter MSE retaining walls or Mechanically Stabilzed Earth Walls are undoubtedly familiar with the FHWA NHI manual on “Mechanically Stabilized Earth Walls and Reinforced Soil Slopes”. This manual, along with the NCMA manual that is used for non-transportation projects, is virtually the bible for MSE wall design. In late summer/early fall of 2009, a revised version of this manual will hit the streets. Read on for more details.