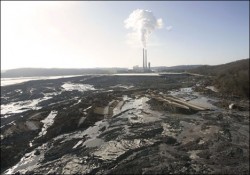 The EPA has released a ton of assessment reports on fly ash impoundments at coal burning power companies around the country. They have assessed a total of 228 fly ash disposal sites in 5 rounds of investigations. The following excerpt from the EPA announcement describes the nature and results of the assessments:

The reports being released now have been completed by contractors who are experts in the area of dam integrity, reflect the best professional judgment of the engineering firm, and are signed and stamped by a professional engineer. The reports are based on a visual assessment of the site, interviews with site personnel, and the review of geotechnical reports and studies related to the design, construction and operation of those impoundments, if available.  The engineering firms also reviewed past state/federal inspections of the impoundments.  EPA contractors were not authorized to conduct any physical drilling, coring or sampling while on site; however, they did review studies which may have included such information.  These reports include complex engineering evaluations and use terms which may be unfamiliar to the general public. Also, the contractors were asked to rate the impoundments as satisfactory, fair, poor, or unsatisfactory, terms commonly used in the field of dam safety. Expert experience has shown that only impoundments rated as unsatisfactory pose immediate safety threats. None of the impoundments assessed so far have received an unsatisfactory rating. Impoundment ratings noted in the reports should be taken in the proper context, since a unit may be found to be structurally sound while it may receive a fair or poor rating based on other factors such as lack of information.

The Corps is proposing to use the fly ash as part of a lime slurry mixture for some kind of grouting to stabilize the levees according to the article. Environmentalists are concerned about the potential […]