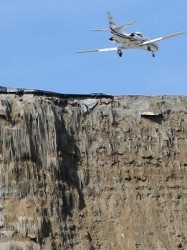 Plaintiffs whose homes were destroyed by the Yeager Airport Landslide in March of 2015 filed a suit naming Central Regional West Virginia Airport Authority and Triad Engineering as well as several others. The CRWVAA and Triad have filed answers to the complaint, and two other plaintiff have filed motions to dismiss themselves from the lawsuit according the the West Virginia Record. Apparently Triad was monitoring the mechanically stabilized earth retention structure as far back as 2013 when cracks were observed. In July of 2014, 28 monitoring points were installed. According to the complaint, every one of the 28 indicated movement between July and August of 2014. That strikes me as odd. Why no mention of movement after that point? Maybe there is more in the actual complaint, but having done that type of monitoring before, I wonder if there were survey issues? I think one take-away here for me is to put some monitoring points outside the potential zone of movement so you can verify that your measurements are accurate. At any rate, the article describes what Triad and the Airport Authority Board knew or didn’t know. This is interesting to me, but there is a lot of legal jargon in the article. So if you have any additional interpretations of what it says, let me know with a comment below! [Source: Read more in the West Virginia Record. Image: West Virginia Record]

Texas Hi-rise To Be Demolished After 16-in of Settlement

September 23, 2009 rockman Failures Comments Off on Texas Hi-rise To Be Demolished After 16-in of Settlement

A partially completed luxury condominium development on South Padre Island on the Texas Gulf Coast is slated for demolition after it has settled by 14 to 16-in, more than double the settlement of the attached […]

The downhill neighbors were suing the uphill neighbor for $2.5M, claiming he ‘girdled and removed trees in the area and redirected stormwater that contributed to the landslide’ which demolished their million dollar dream home. But […]