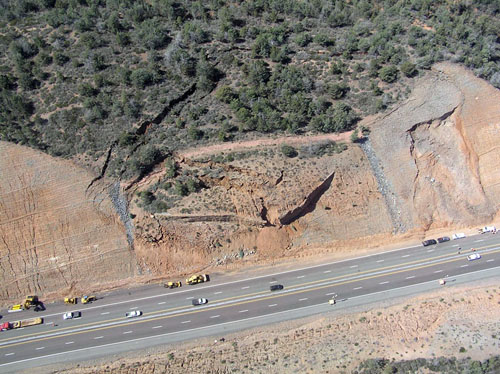 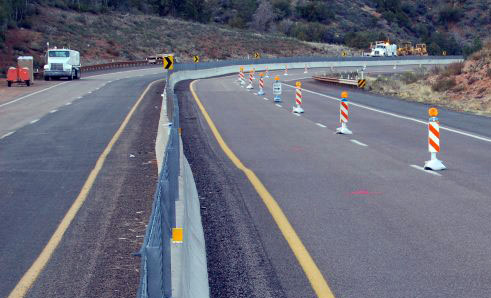 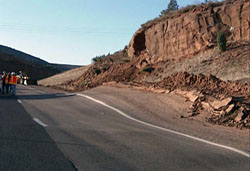 From very early on the Arizona Geologic Survey or AZGS has been very active in assisting ADOT in analyzing the slide. More information and a preliminary report can be found on AZGSâ€™ SR 87 Landslide page. The Arizona State Geologist, Lee Allison has also been reporting on the slide at his blog, Arizona Geology. On that blog, he discussed a 1995 USGS report issued to ADOT covering the geology of the new SR 87 alignment. In that report, the author, Clay Conway, mapped a landslide deposit 120-ft thick in close proximity to this slide (see the map at Leeâ€™s blog). There does not appear to be much information in that report though that would be useful for engineering analysis. (Photo by ADOT) 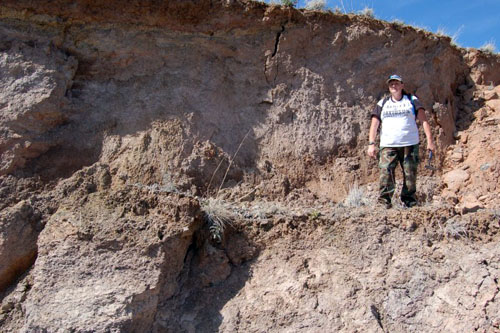 Mimi Diaz of the AZGS at the head scarp of the slide (Photo by Brian Gootee, AZGS)

No word yet on what ADOT plans to do to stabilize the slope, if anything. Based on past problems in that corridor, and on photos from AZGS, it appears that they have opted to simply lay back the slope to a shallower angle, a perfectly acceptable engineering solution (if it works) if not the optimum one from an aesthetic perspective. Whether that is a temporary or permanent solution remains to be seen.

According to ADOT, the highway has been re-opened as of today, March 27. They have a single lane open in each direction, in the northbound lanes (farthest from the slide). They likely will have additional work to do to repair the damaged roadway. Weâ€™ll post more updates as they come in. 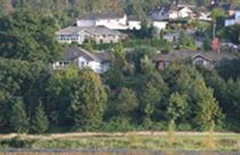 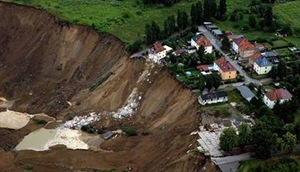 A large landslide occured on the hillside above a complex of apartment buildings last week, partially collapsing 3 buildings and killing at least 3 people and injuring more. Dave Petley of the Landslide Blog notes […]