Owned by the East Bay Municipal Utility District (EBMUD), the original tunnel was 3.4 miles long and 9-ft by 9-ft and was completed in 1929. At the time, no special design considerations were made for the fault. A nominal 1-ft thick concrete lining was used, and little of that was reinforced. Only a small portion of the final tunnel was contact grouted to fill in the voids between the lining and surrounding ground. 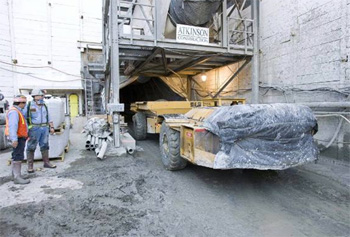 In 1995 the EBMUD commissioned studies that predicted $1.9 billion in economic losses if the water supply from the Claremont Tunnel was disrupted. They decided to institute the upgrade project that would involve the construction of a bypass tunnel 1,570-ft long in order to meet project constraints of keeping the tunnel in service except during the winter and minimizing cost and overall construction duration. (Photo credit: EBMUD)

The design criteria for the bypass tunnel included a 7.0 moment magnitude earthquake and 7.5-ft of offset horizontally and 0.75-ft vertically along a 60-ft wide section of the fault called the primary fault zone. The rest of the tunnel could have up to 2.25-ft of secondary offset. Creep offset of 0.25-in/year needed to be handled in the primary fault zone as well. The minimum â€œlifelineâ€ needed to maintain firefighting ability and basic service was determined to be 130 mgd. 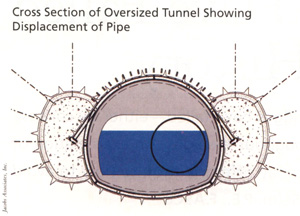 The approach was to construct a vault in the bypass tunnel 108-ft long by 17-ft wide which can accommodate up to 8.5-ft of horizontal offset. It was constructed by excavating two side drifts and then excavating in between while installing structural supports and grouting. The side drifts were filled with concrete so that if the fault ruptures, the water will not scour out the native material, it will still contact concrete. Every 11-ft a break in the longitudinal reinforcement creates preferential shear planes to avoid major damage to the tunnel lining. (Image credit: Jacobs Associates, Inc. by way of Ref. 1)

Within the vault and settled in a cradle is a carrier pipe made of 3-in thick steel lined and coated with cement mortar. The I.D. is 6-ft, which was sized to meet the 130 mgd requirement. If the tunnel is blocked with debris, the carrier pipe can displace and still allow the water to flow. 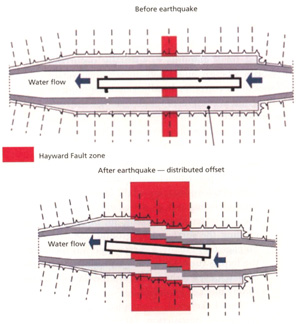 The geological and geotechnical information used during the design were obtained from regional USGS maps, surface mapping and borings along with review of previous logs and construction records for the Bay Area Rapid Transit (BART) Districtâ€™s Berkeley Hills tunnels and the original Claremont Tunnel. During tunnel excavation, geological maping was performed in side drifts and the vault by geologists from Geomatrix, the geological and seismological consultants, and EPC consultants, the firm responsible for tunnel inspections. This mapping helped to establish the carrier pipeâ€™s optimal location.

The construction of the bypass tunnel cost approximately $38 million and was commissioned on May 30, 2007. The involved parties in the project were: