As a result of the increased pressure on DOT’s to inspect their bridges in the wake of the I-35 Bridge Collapse in Minneapolis, KDOT bridge inspectors noticed a problem with the bearing devices at both abutments of this truss bridge sometime in the spring or summer of 2008. The connections had completely sheared through and the only thing holding up the abutments was gravity and “rust” according to Mr. Brennan. Bridge engineers were worried that if there was an unusually cold winter, the superstructure could literally fall off the abutment caps due to temperature effects. So an emergency repair program was immediately instituted, and Hayward Baker was selected as the contractor.

The abutments are located on a Corps controlled levee structure and the stratigraphy consisted of approximately 20- to 30-ft of levee fill, 30-ft of alluvial deposits overlying a competent shale formation.  Spread footings were not considered a good option based on the geometry of the levees (global stability and bearing capacity considerations) and pile driving was ruled out, I assume because of the vibrations associated with the driving. A micropile system was selected and consisted of 3 groups of piles per abutment, socketed 20- to 30-ft into the shale (so 95- to 100-ft long micropiles).

Some of the problems they encountered were issues with the micropiles themselves as the contractor obtained rejected casing from the oil and gas industry. There were a number of piles with bad threads, split along welds and other issues. But in the end, only a relatively small percentage of what was delivered was rejected by KDOT. Other issues included Corps restrictions including no hammer drilling which required them to use continuous flight auger equipment for drilling, low overhead clearance, and the need for a temporary 14-in casing to stabilize the holes for micropile drilling. Also, the contractor needed to mobilize 4 drill rigs to meet the tight project schedule.

The work was started in August of 2008 and finished prior to Thanksgiving the same year. Once the foundation system was completed, a steel structure was erected at each element to allow hydraulic jacks to be placed underneath the trusses to take the load off the abutments so they could be fixed. They ended up raising the bridge by 4- to 6-inches to allow the iron workers enough room to make the repairs.

Again, the preceding description of the project was based on my notes from the presentation. I had hoped to introduce myself to Mr. Brennan and perhaps get a photo or two from him, but I couldn’t catch him before I needed to leave. I welcome any comments or corrections from anyone with additional knowledge of the project. 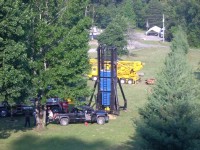 Mar 10, 2011 – Odenton, Md. – John P. Rubright has been named president of Hayward Baker. He succeeds George R. Grisham as the fifth president of the company.

Rubright has been with Hayward Baker for 25 years. A civil engineer, he is highly experienced in geotechnical construction applications and has managed projects employing many of Hayward Baker’s technologies. Prior to being named president, he served for ten years as vice president and then senior vice president of the company’s Southern Region, where he directed financial, manpower and equipment resources along with being responsible for the design, management and installation of specialty construction projects in Florida, Georgia, South Carolina, Tennessee, Kentucky, Alabama and the Caribbean countries.

[Editor] Click through for the rest of this press release from Hayward Baker. [/Editor]