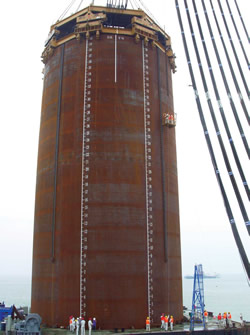 December 8th 2011 5:00 PM – American Piledriving Equipment’s 8-hammer “Octakong” vibratory pile driver hammer drove the final record breaking pile in front of a crowd of over 200 people on the South China Sea, who came to witness the world’s largest pile drive to grade. The last of 120, 72’ diameter steel piles has been driven into place, completing construction of two circular sea bound walls in the South China Sea, for the Hong Kong-Zhuhai-Macau Seaway project.

72′ piles, driven with American Piledriving Equipment’s giant eight-hammer piledriver called The Octakong, for the Hong Kong-Zhuhai-Macau Seaway project, are the largest piles ever driven. These 72′ diameter steel piles, and the equipment that install them, enable an acceleration in cofferdam and seawall construction that paves the way for land reclamation and sea-bound construction across the globe.

The two enclosed sea-bound walls are to form bulkheads for two artificial islands under construction for the Hong Kong-Zhuhai-Macau Seaway project due to be finished 2016.

The two islands will form transition structures between the project’s 4.2 mile tunnel section, built to allow deep water ship access to the Pearl River Delta from the South China Sea, and three cable-stayed bridge spans linking Hong Kong in the east to Macau and the mainland Chinese city of Zhuhai to the west.

The artificial islands’ seawalls each comprise 60 individual adjoining cells, each adjoined by wingwalls, in order to form to perimeter of the island. Traditional construction methods of the bulkheads would have taken years, with each cell having to be fabricated individually by driving one interlocking sheet pile at a time to form each cell, and each cell constructed to adjoin the next until the island wall perimeter was closed. A construction method driving the cells as individual massive steel piles had never been tried on this scale in these conditions. The pile driving equipment capable to supply the force to drive the piles was conceived of, but not yet constructed. 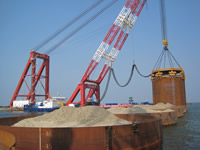 By using the innovative Octakong pile driver to drive the 72′ diameter piles, the construction schedule was reduced to less than 7 months.

Commenting on the project, APE President, John White said “The completion of the circumference of each island’s wall marks major advancements in the field of sea-bound construction, land reclamation technology and pile driving – at 72’ these are the largest diameter steel piles ever installed.”

Seattle’s Pier 57 will soon be home to a 175-foot tall Ferris wheel with 41 air-conditioned gondolas. The foundations for this soon-to-be-landmark consist of 150-ft long, 30-36" steel pipe piles driven through glacial till. The […]

In Bell Chase, Louisiana, a huge vibratory driver/extractor manufactured by American Piledriving Equipment Inc. was used to extract 54-in diameter pipe piles 140-ft deep. The piles were part of a cofferdam for the largest pumping […]

Well-known pile hammer manufacturer APE has purchased technology for driving and coupling large diameter helical piles that could help make this technology more mainstream. Rather than pounding the pile into the ground, the steel drill […]