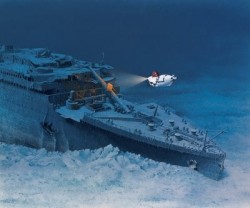 A marine geologist with Natural Resources Canada, Steve Blasco, wondered why the wreck of the Titanic did not sink completely into the ocean sediments at its resting place 4 km below the surface. Mr. Blasco used core samples of the sea floor at the site to determine that the Titanic now sits on a million year old marine landslide deposit. Presumably this deposit is stiffer than other types of marine sediments. Mr. Blasco has studied a number of other scientific aspects of the Titanic wreckage, including the bacteria that is causing the formation of ‘rusticles’ and will one day completely dissolve the vessel. His group has also found numerous life forms in the oxygen-deprived depths, and a discovery that the steel used in the construction of the hull was brittle because of high sulfur content steel, and the rivets were high in slag. [Source: Castanet.net. Image: destinosdeviagem.com]

Some clever researchers have devised an algorithm to collect information on landslides occurring around the world by analyzing social media posts. They use a variety of search terms to flag a post as being potentially […]