Two recent projects using TerraThane™ geotechnical polyurethane grout were successful in solving seepage problems. TerraThane™ is a two-part geotechnical polymer that when mixed at the injection location, expands to many times its initial volume and permeates through porous soil, and fills voids and fractures in more fine-grained material. It is essentially impermeable and safe for use, even around potable water.

In Neshoba County, MS, the Mississippi Department of Wildlife, Fisheries, and Parks (MDWFP) was noticing some severe undermining in the Neshoba County Lake Spillway as well as other signs of distress. The MDWFP contracted with Bulldog Construction to treat a 175′ x 160′ area-wide area using Deep Soil Injection with TerraThane 24-003 polyurethane grout. They injected the material at three depths (1 ft, 4 ft, and 8 ft) on a 4 ft by 4 ft pattern.

The project took 3 days with about 40 cubic yards of material (approximately 4,000 lbs of 24-003.) Bulldog Construction sealed the diverters, undersealed the slabs, and stabilized the soils at depth. The seepage remediation likely saved significant damage or potential failure of the dam spillway.

A family farm in El Dorado, AR had a clay-lined pond constructed along a creek that had become a family gathering place. Despite being clay-lined, the pond never filled completely and was continually losing water. The problem was determined to be at the interface between a dirt road embankment and the native soil adjacent to the creek. FoamWorx, a Little Rock, Arkansas-based contractor, determined a polyurethane grout curtain was the right solution for sealing the area and stopping seepage.

FoamWorx designed a 4 ft deep, 5 ft on-center injection pattern to create a grout curtain at the base of the roadway using NCFI TerraThane 24-003 geotechnical polyurethane.  The two-row injection pattern was shot at the top of a hardpan, at approximately 4 ft below grade, ensuring optimal spread and material consolidation. The pond has since filled and the problem was solved at approximately 1/6 of the cost of alternative methods.

[Editor] NCFI, the makers of TerraThane, is a sponsor of GeoPrac.net. [/Editor] 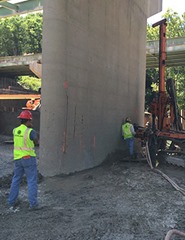 PITTSBURGH, PA – Nicholson Construction recently completed emergency repair work to an unstable pier supporting a bridge on INDOT’s Interstate 65. These repairs enabled a 37-mile section of the highway’s northbound lanes to be reopened after a four-week closure.

The highway was in the process of being rehabilitated and widened when the pier was damaged by steel piles driven into the water tight ground below it. The pier began to settle and eventually rotated ten inches.

Nicholson developed a design-build solution that used micropiles to transfer the loads to more stable soils and low-mobility grouting to fill voids and densify the upper subsurface layer.

[Editor] Read on to hear more about Nicholson’s fix of this unstable bridge pier. [/Editor]