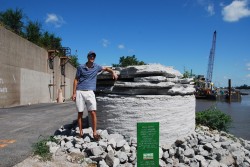 70 boreholes were completed as well as 7 load test piles to characterize the geotechnical conditions for this well known bridge spanning the Hudson River in New York. No significant surprises were encountered compared to […]

July 1, 2010 rockman Failures Comments Off on Crane topples over Chena River in Fairbanks, Alaska while driving piles for new bridge

A crane using a pile driver to install new foundations for the Barnette Street Bridge project. A DOT (City of Fairbanks?) spokesman speculated that the crane overextended itself while installing piles about 40-ft away. The […]

Colorado’s I-70 Could Have Boston’s Big Dig Beat

February 11, 2008 rockman Project Related Comments Off on Colorado’s I-70 Could Have Boston’s Big Dig Beat

The planning board for transportation improvements along the I-70 corridor in the Denver area of Colorado is pondering some improvements that, if implemented, could rival Boston’s "Big Dig" for cost. A high-speed train is being considered which alone could run $12 billion.

"A high-speed train is really the long-term solution, and . . . part of America’s long-term future is getting people out of single-occupancy vehicles," said Penny, Frisco town manager and head of the I-70 Coalition. He added that an I-70 project could outstrip Boston’s $14.8 billion "Big Dig."