Some of the latest info that came out is that the retaining wall in question did not have a permit from the City for its construction. 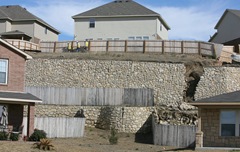 Dave’s Landslide Blog has some nice info on the fiasco, it has even attracted some comments from affected residents. He noted a strange lineation on an old image in Google Earth. I’m not sure I would agree that it was related to a slope or wall failure, it looks more like water draining down the street  from someone washing their car or something. (Photo by Rodolfo Gonzalez – American-Statesman)

The Eng-Tips geotechnical forums have a few threads on the failure as well. A lot of arm-chair geotech going on there, here is the best thread I’ve come across. While we’re doing the arm-chair thing, that retaining wall doesn’t look like much of a wall to me, more like grouted rip-rap (see closer photo below). 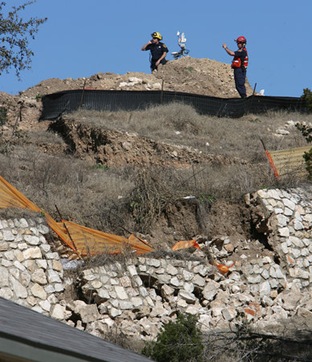 A landslide struck the village of Gjerdrum, which is about 25km (15 miles) north-east of the Norwegian capital, Oslo. The slide is already being called a “quick clay” landslide by officials. It occurred around 4 […]